Boveda pouches are a two-way humidity control method that is often used for cigars. See where to buy them on my Useful cigar links page. I happen to think they are a genius product as they are so simple yet so effective. They work on the theory that various saturated salt solutions regulate the humidity to a set-point, either taking in or giving out moisture to ensure it is correct. What Humidipak did is gel the solution and stick it inside a pouch made of a moisture-permeable membrane. Think of it as a salt-test wearing Goretex.

The Boveda site seems to suggest that the pouches last a few months then you should throw them away. Given that it gives out moisture and absorbs it, what’s to stop you letting it suck back up more water when it’s dried out? I could see no reason why I could not reuse or recharge a Boveda pouch.

I attempted to recharge a dried-out Rocky Patel Humidipak by suspending it in a sealed plastic bag with deionised water sprayed inside. Bear in mind this pouch was so dried out it was hard and flat ie. no water inside. I suspended it because the pouch says not to soak in water. No idea why-that’ll be an experiment for the future! 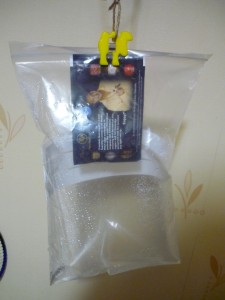 The idea being to keep the relative humidity in the bag higher than the (currently unknown) set point of the Humidipak pouch. Lo and behold, a day or so later the pouch has puffed up and absorbed some water. I did notice that once there was some liquid inside the absorption appeared to proceed much quicker, so it would be a good idea not to let them dry out completely if you use them.

The only reason I can think of why this couldn’t be done indefinitely is decomposition of the salt used, but given the use they are sold for, I suspect that stable non-toxic salts will be used. I shall have to see how long I can keep reusing this one for!

After leaving it to absorb the water for a couple of days, I’ve tested it with a digital hygrometer and it’s currently reading 69%. I contacted Humidipak and got a very prompt reply informing me that the Rocky Patel ones are 69%. So far so good. I’ll salt-test the hygrometer after I’ve done this test. I’m surprised at its accuracy considering it only cost me a fiver.

For the purposes of the experiment, I’ll say that recharging Boveda pouches appears to work, and that they appear to still function correctly after doing so.

This entry was posted in Cigar accessories and tagged recharge boveda, reuse boveda. Bookmark the permalink.