[they’ve changed the store name now] a few months back and while they do the job adequately, being me I wondered how they’d take sharpening. So I gave it a go…

The punch in question was a Wolf Easy Punch. Image ‘borrowed’ from their website. 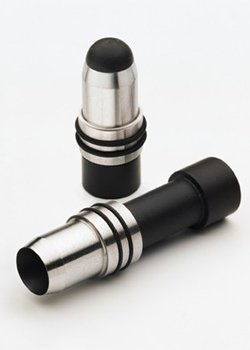 For a couple of quid I thought I’d get more than one. As I don’t know what kind of stainless steel is used or what hardness it is, I thought I’d go with a rather obtuse edge angle of 45°. That way if the steel is soft then it shouldn’t cause too many problems. I used a Fallkniven DC4 combination diamond/ceramic stone to sharpen, just because I really like it!

I started with the diamond side, pushing the edge of the punch towards it, rotating it slowly in my fingers as I did so. After a few minutes I could see the edge was gleaming and rough. I took this to mean that I had formed a burr, so I used the corner of the ceramic on the inside to break it off. It felt a bit sharper after doing this, but the idea was to form the shape rather than the edge. 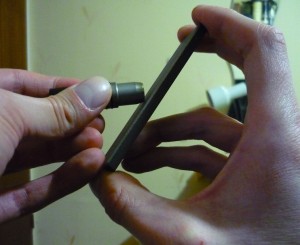 I then continued with the ceramic side at a slightly steeper angle so I caught the edge. It was easy to tell when the angle was enough as it sounded like fingernails down a blackboard! I only did the outside this time as I didn’t want to damage the edge I appear to have made. Even if it is just a burr again, it seems to cut well. The punch will now slice 80 gsm printer paper, a vast improvement on before. I shall update with its performance on a cigar when I use it.

If you try this yourself, I accept no responsibility for you damaging your punch, yourself or your cigars!

This entry was posted in Cigar accessories. Bookmark the permalink.