I had seen mention on Trevor’s excellent CubanCigarWebsite.com that UV light could be used to determine whether white growths on a cigar were mould or bloom. Considering the number of times this comes up on cigar forums I was completely unable to find this mentioned elsewhere on the web, except in reference to Trevor’s site. Perhaps my Google-Fu is failing me.

It seems reasonable to me that mould and/or bloom should fluoresce under UV so I decided to test it and attempt to provide pictures. I have a UV LED keychain specified to emit UV at 365 nm that I originally bought to check cigar box security seals and banknotes. I don’t know whether this is the best wavelength to use for this purpose but it’s all I have at this point in time. 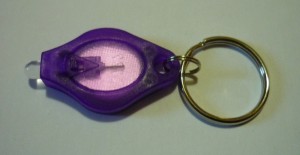 I do not currently have any cigars with visible bloom, or any mouldy ones for that matter. However, having looked at some of my cigars under UV, some do have tiny speckles that fluoresce. There are no white patches visible on these cigars, so I am assuming (perhaps naively) that this is the start of bloom rather than mould. This photo has only been cropped and resized; no other editing has been performed. These are Por Larranaga Petit Coronas with a box code of October 2007. 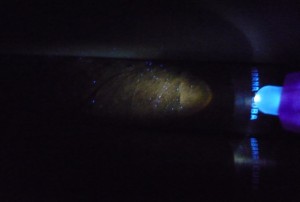 The distribution of the speckles is also consistent with bloom rather than mould, as bloom is relatively even across the wrapper, whereas mould starts at a point and grows outwards.

I will sacrifice a La Flor de Cano Preferidos for the sake of this experiment. I have put it in a sealed plastic bag with some wet tissue paper (using distilled water) in an attempt to keep the relative humidity as close to 100% as possible. 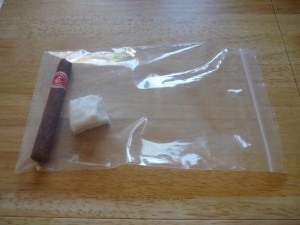 I am hoping this will cause the cigar to start growing mould thus enabling me to test the UV light on it. I will determine that it is mould rather than bloom from the speed at which it occurs.