Gwdihw, one of the nicest live music venues I’ve been to, hosted what I believe to be Cardiff’s first Cuban cigar tasting event on the 23 August 2011. For those who don’t know, gwdihw (pronounced goody-hoo) is the somewhat onomatopoeic Welsh word for owl. I’m led to believe this is specifically South Wales dialect. 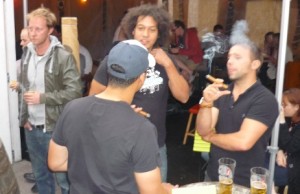 Arranged in conjunction with Cardiff’s Bear Shop tobacconist (in Wyndham Arcade in the city centre) and Reserve Brands (a division of the booze giant Diageo), this ticket-only event gave you the option to purchase a cigar at a slightly discounted price. Given this was something that I was pleased to have happening in Cardiff, I thought I’d go all out and try one of the rather expensive (for me at least) Cohiba BHK 52.

I was concerned that they may still be a little young as they were only released in 2010 but this didn’t seem too much of a problem with the one I sampled. It was a little drier than I usually like to keep mine but I’ve still not got round to experimenting properly with the effects of humidity on taste so don’t take that as a criticism! 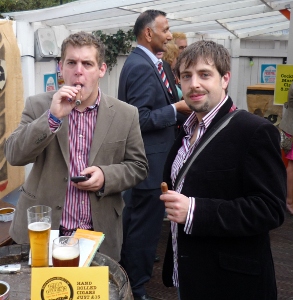 Only ever having smoked the Secretos from the Cohiba range before, it’s difficult to compare as the maduro wrapper on the Secreto contributes so heavily to the taste. It was certainly an enjoyable cigar with a reasonable amount of complexity, but I’m not convinced it was worth the money, even if you bought it in Duty-Free! I’d suspected given the amount of hype surrounding the launch of these, that the price was somewhat inflated purely for marketing reasons i.e. to create an artificial sense of scarcity. At least I can comment on the actual cigar now! I will point out this mega-price seems to be global, not just for the UK…

Hunters & Frankau, the UK Cuban cigar distributors, periodically bring over a professional cigar roller from Cuba as I’ve mentioned about before in my Cuban cigar roller post. This time was the turn of Senora Berta Corzo Thorpe who sat there expertly rolling robustos all night. 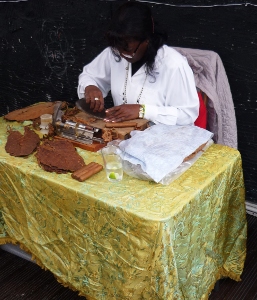 Being more a fan of the corona gorda vitola, I asked if there was any chance she would roll me something nearer that size. My luck was in! I was told the tobacco was at least three years old and was of medium strength.

Going on my last experience of smoking a custom-rolled cigar, I decided to smoke this one straight away. This was a superb idea. One of the tastiest cigars I’ve ever smoked. Much milder than I was expecting but not at all to its detriment. A subtle sweetness and SO smooth. If you ever get the chance to get your hands on a cigar that has just been rolled, I’d wholeheartedly recommend smoking it straight away! It was about this point in the evening that a member of staff turned up with some FREE spare ribs and chips. Fortunately for the three of us attending from UK Cigar Forums (myself, Simon of Cigar Monologues and Steve of SteveGriff.com), these were plonked down right in front of us. 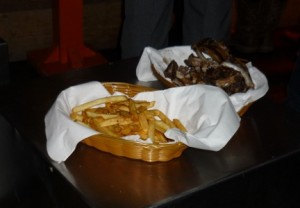 I finished the night off with an El Rey del Mundo Choix Supreme (box code ASE MAY 09; in humidor since 1 March 2010). Perhaps a strange choice after the other two, you might think, but I didn’t want to overdo it on the nicotine and I’d had quite a bit of rum by this point (more on that in a bit!) This seemed the perfect choice for the hour…

The whole event was staged out the back as Gwdihw have an excellent covered outside area. We were very lucky with the weather! Next to Berta was a bar serving all kinds of Cuban rum based cocktails. I started with a Cuba Libre but quickly moved onto neat Ron Zacapa 23 year old once I discovered how amazing this rum truly is. Nothing like that Captain Morgan filth!

This spectacular evening also gave me chance to have a chat to a few very interesting people.

First up was Patrick who works in sales for Hunters & Frankau. It was a joy to talk shop with him as he’s been in the industry longer than I’d care to divulge, and we enjoyed discussing the intricacies of the UK and global cigar market at some length.

I managed to meet Paresh Patel (owner of the Bear Shop) for the first time and was quite surprised to discover that he was aware of the video I put up on Youtube when the previous cigar roller attended the shop. A very approachable, friendly and knowledgeable man, as evidenced by the excellent condition of the cigars available to purchase in his store. I speak from personal experience here!

I also met Jody from Bulldozer Films who are making Cardiff Born Cardiff Bred, our very own (and of course far superior!) version of The Only Way Is Essex. It’s starting online in September so remember to keep your eye out for it. Check out their Twitter or Facebook pages for further info.

Going on the spectacular turn-out at this event, I wouldn’t be surprised to see more similarly themed nights in the future. This pleases me no end!