Only a little’un this. I’ve put a normal size Clipper lighter next to it in the photo to show the scale. I believe it was from 2001 and had been in my humi since 19 August 2009. I did put this in the 65% jar a few weeks back (at least a month) as they were a bit tight. It seemed to have only slightly helped. 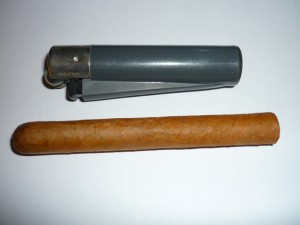 Previous tries of these seemed to taste bitter, and strongly of tea. I had wondered if this was because they were too tight hence trying 65% rather than leaving it in the 69% tub.

This did taste less bitter, but the draw was still tight. It was annoying to have to pull hard to get enough smoke which made it heat up lots. I resigned myself to drawing REALLY slowly. Perhaps it’s a throwback to my cigarette days, but it’s just not satisfying to draw that slowly. There was more woody taste this time. I’ve just realised that I have a recent one of these so I’ll be able to see if it my experiences have been down to over-tight rolling, rather than it being the actual flavour of the cigar. Anything’s possible!