Pre-light it smelt of sandalwood, or something else like incense. Perhaps this is what Spanish Cedar smells like! The draw was a slightly sweet tobacco. Looked OK, good draw (not too tight or loose). Minor wrapper damage near the band 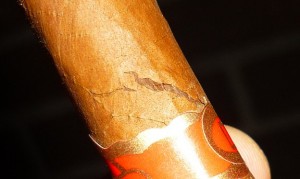 Started out as ‘carpet’ with the slightest hint of coffee. There was a touch of harshness which seemed to be masking some flavours. I opened a can of cold Sprite to go with it, and a swig of that seemed to clear the harshness from the initial few draws giving way to mild tobacco flavours. About a third in, it took on a perfumed aspect that was quite pleasant, then in the remaining third something I couldn’t quite put my finger on cropped up. Grassy, ‘dirty cream’ or maybe even the slightest hint of marshmallow. I’ve smoked non-Cuban cigars that were better, but for the price (free in this case…) it was a worthwhile smoke, if a little bland. Evenly burning stick, but ash didn’t hold on long.

It looked handmade to me, but the speed of burning suggested short filler. Nothing wrong with that for a quicker smoke!