I’d been going through my cigars checking their condition when I noticed this Saint Luis Rey Serie A had a touch of fluffy white mould on it [after a comment that it might have been bloom, I realised I didn’t mention that I believed it to be mould as it was localised and it didn’t fluoresce under UV light-I may be wrong though!]. Now, after cigar beetles, this is one of the things I fear the most. I’d already punched this one and put it back in the humi some months back, as I’d given it a test draw and felt it was too tight. I can only surmise that my saliva helped the mould grow as none of the other cigars had any on them. I will keep a close eye on them though!

Here are some photos of the mould in greater detail. I may have disturbed the structure by the time I took these so it may not look particularly fluffy. 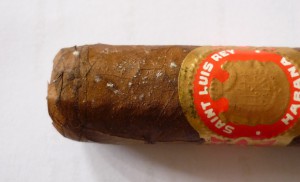 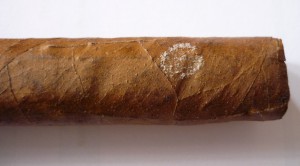 As this was my last remaining one of these, and the mould hadn’t entered either end of the stick, I brushed it off and smoked it anyway!

I was a little disappointed in this. First off, it felt beautiful to the touch, a bit like leather with a slight velvet feel, slightly oily too. The smell was so rich, like a strong dark chocolate with hints of coffee bean. The pre-light draw had a slightly sour taste about it, like I get with most other Cuban cigars. The draw had loosened up as hoped, enough to smoke but still tighter than I would prefer.

It lit easily, but this is where it went downhill I feel. It was difficult getting as much smoke as I’d like, but a bit of a massage and it improved. It had  a citrus note all the way through that I just didn’t get on with-I’ve experienced this with previous cigars from the Saint Luis Rey marca. I gave up on it with two inches to go. I doubt I’ll be looking to investigate SLR further…

This entry was posted in Cuban cigars and tagged cuban cigar, Saint Luis Rey Serie A review. Bookmark the permalink.