In addition to biscuit, this had what I can only describe as a ‘good cigar’ smell. Refined and rich, yet also quite subtle. I gave it a clip with my Cuban Crafters cutter and the test draw had that characteristic sour hint. Spot on with the tightness of the draw incidentally. Construction was good as you’d expect at this price point, though there was a green water spot near the head which was a bit annoying. 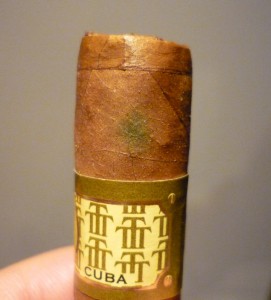 It lit easily with my Turboflame lighter. No particular flavours jumped out at me immediately. About 3-4mm in however, liquorice/aniseed started to become noticeable. I had decided to accompany this with some Southern Comfort upon recommendation that it went well with cigars. This not being a particularly sweet cigar (even with the liquorice note) I think the combination worked quite well. It seemed to bring out the smokiness. I don’t mean like cigar smoke, I mean like a whisky peat flavour.

Leather kicked in heavily about a third in, giving way to biscuit (a bit like Rich Tea to my taste) about halfway. For the last inch, the liquorice popped up again. Being a young cigar, this was exceptionally smokeable but had a heavy nicotine kick. I must admit I was prompted/reminded to open these after reading a thread concerning cigars that smoke well when young on UKCF.