UKCF annual herf at The Prince of Wales, Moseley

If you like cigars and aren’t a member of UKCigarForums, pop on over and join.

Saturday 6 August 2011 was an attempt to get as many forum members possible meeting in one place. That place was The Prince of Wales pub in Moseley, Birmingham. A superb venue obviously designed to cater for smokers (greatly helped by Keith the landlord being a cigar aficionado himself), with such a mixed crowd that nobody need feel out of place. Apologies for the quality of the photos… 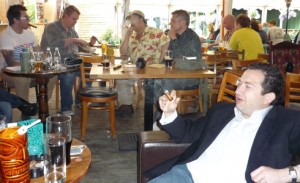 Considering the majority of the London contingent were either on holiday or content to stay inside the M25, we did quite well on numbers!

I arrived later than hoped as I accidentally stayed out rather late the night before and was still awake at 4am. I eventually arrived about 4.30pm and there was a good crowd already. Some familiar faces and lots of new people who I only know by UKCF username. Keith, the landlord, had arranged some cigars for blind tasting so I started with one of them. 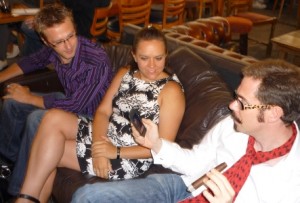 This was a Churchill-sized cigar that felt really good to the touch and had a very weak aroma pre-light. I lit up and it started to smoke OK. Nothing particularly exciting for the first half-inch but then an acrid taste popped in and didn’t go away. I got at least half way through this cigar but there seemed to be little taste progression. In all truth I just wasn’t enjoying it so I had leave it to die out in the ashtray. I did feel guilty at not finishing it but I only had a limited amount of time. The big surprise was finding out that not only was this Cuban, but it was a 1998 Romeo y Julieta Prince of Wales! I’m not the biggest fan of RyJ but this was a complete surprise to me. I suppose the feel of the cigar could have given away its age but the taste was certainly not becoming of the brand.

I moved onto a Por Larranaga Petit Corona (EMA OCT 07; in humi since 28 November 2009) next, which while giving what I consider to be its characteristic ‘Milky Bar‘ flavour was irritatingly tight so difficult to get smoke out of. I managed to finish that at least, but it certainly reminded me to give cigars a test draw before actually lighting them, so I don’t waste them. Despite a good poking with a slim screwdriver, there was no improvement.

My next was a first for me. A Partagas 8-9-8v (MUA OCT 09; in humidor since 17 March 2011). Everyone seems to love this cigar and I can see why. A test draw ensured this was actually going to smoke properly and it lit easily. Characteristic Partagas flavours that got a bit heavy towards the end. I bet these are superb with some more age on them. I’m not going to give much of a review about this one (in this post) as I feel I wouldn’t be doing it justice due to not concentrating on it. Excellent smoke though!

This entry was posted in Cuban cigars, Non-Cuban cigars. Bookmark the permalink.

1 Response to UKCF annual herf at The Prince of Wales, Moseley