Smoked on Saturday 28 November 2009. I’ve only had these in the humidor for two weeks, so I suppose I shouldn’t be surprised but this appeared to have absolutely no taste whatsoever!

Pre-light this had that smell that I have come to expect from NCs so far. I can only describe it as ‘head-shop’. I suppose it’s herby and sweet but I can’t quite put my finger on it. The smell at the foot was a bit richer. Cutting the head with a Palio it seemed a bit crispy, almost underhumidified. Draw was good, slightly sweet. No complaints on the construction either. Took a bit of lighting as some areas seemed as if they were struggling to catch. Once lit, no problems though.

There’s not a lot to say about this in all honesty. The smoke was slightly sweet but very very mild. Perhaps I’m just expecting too much? Pleasant aroma and exhaled through the nose. The ash seemed to hold on fine too. I must admit I put this out prematurely as I got bored. We’ll see how these improve with more humidor time. 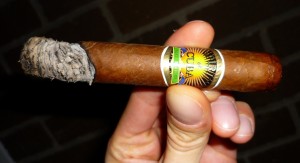 This entry was posted in Non-Cuban cigars and tagged Alec Bradley Spirit of Cuba Corojo Robusto review. Bookmark the permalink.