I must admit I was surprised by this. The first NC I’ve smoked that didn’t remind me of a head shop. Been in the humi since 17 September 2009 and smoked Saturday 5 December 2009.

Pre-light this smelt quite rich. The wrapper was musty with a hint of cocoa, and the foot was a MUCH richer smell of cocoa with perhaps the slightest touch of butter. Construction was good overall though the cap looked a little badly put on. Gorgeous looking wrapper; had the darker mottling effect that aged tobaccos like my Sublime and Duke have. Whether this is because it is a maduro wrapper or simply from the age, I’m not experienced enough to know. A rather severe box press, despite not having been in a box in my possession. 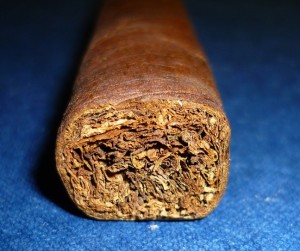 Cap clipped with a Palio. Draw seemed pretty loose. This actually took some lighting but I got there eventually. The draw once lit was excellent. The first 5 minutes or so were very peppery, dying down and the flavours starting to come in about when I took this picture:

Admittedly, the flavours were not very noticeable for some time. Only perhaps a touch of coffee. This gave me ample chance to notice the beautiful crisp white ash developing.

When I ashed the first time, about a third in, it seemed to float away and shatter when it hit the floor. Much less dense and more brittle than typical Cuban cigar ash. It was about now the flavours started becoming more pronounced. I suspect they would be described as ‘bean’ flavours by those who know what they are talking about i.e.  coffee, cocoa, vanilla. Well balanced, with vanilla probably the least. A very creamy and smooth smoke at this point. 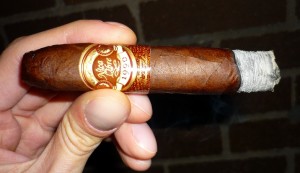 Into the last third now and it seemed to sweeten up somewhat, with a stronger chocolate note. The draw did start getting tighter here so I tried purging it which gave temporary respite. A little massage also helped but in the end I gave in and let it die with dignity. 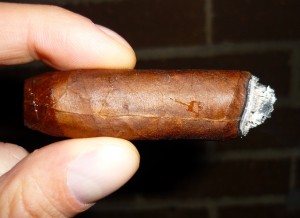 That is a single drop of rain you can see on this photo. Not the most pleasant weather to smoke in…