One of the compromises of living with a non-smoker is that I don’t get to enjoy my cigars or my pipe in the luxury of my own home. Now there are numerous ways to deal with this, not all of them conducive to maintaining a healthy relationship…

As winter draws closer smoking outside is losing its appeal rapidly. Thankfully, I appear to have found a relatively painless answer, and I’m going to tell you about it. 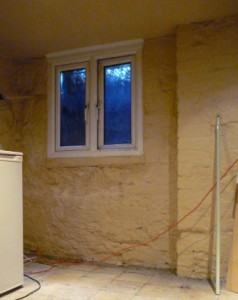 I have a basement with a window that opens under a grill on the street. Being underground, there is very little airflow in or out of the window. That said, a little-used room with no soft furnishing to absorb smells would be the most suitable area for smoking in. I decided that an extractor fan would be the best bet but I’m pretty sure you can’t fit one to a double-glazed window. I realised if one of the windows is opened, a board can be fitted flush against the window frame and an exhaust fan put into that. I started with a bit of plywood I found and cut it to size. Easy enough.

Next problem was the exhaust fan. I was thinking of getting a mains-powered version of those you’d find in a computer – a box fan I believe they are called. Looking around the internet they seemed REALLY expensive and I was trying to do this on the cheap. I had considered using a bathroom fan but my experience of them is that they are loud and aren’t particularly effective. Further investigation revealed that there were two main types of bathroom fan: axial and centrifugal. The centrifugal fan is far superior for this type of application as they produce a higher pressure for a given air volume. They seemed expensive at the usual DIY stores but I eventually found one at the ever-reliable Screwfix for about thirty quid.

I cut a hole out the plywood of the required size in a sensible place and screwed the fan on. Switching to vaping and using the Grey Haze pod mods remains an option too. 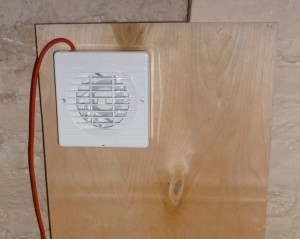 I wired it all up and plugged it in using an RCD so I didn’t electrocute myself by accident. The next difficulty was keeping it in place. To prevent air leakage around the edges it is best pressed against the window frame so there are no gaps. Unfortunately, I’ve not managed to achieve this yet as I’ve got it held on with a broom handle wedged behind the handle of the other window. 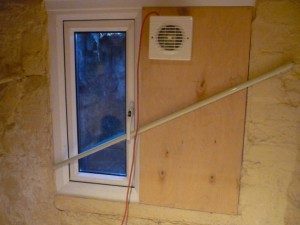 My plan is to get some quick-release clamps and fasten them through the board, and probably put some closed cell foam (like foam camping mat) around the edges to create a better seal. There is some residual smell the day after but I’ve bought this ozone generator on eBay

which should sort that out.

Have you do made anything similar? How do you reduce the smell where you smoke?