I’d seen this mentioned online before so when I saw it in Morrison’s I thought I’d pick a pack up. Underberg seems to be marketed as some kind of tonic, and at 44% ABV, I’m sure it would do me the world of good! 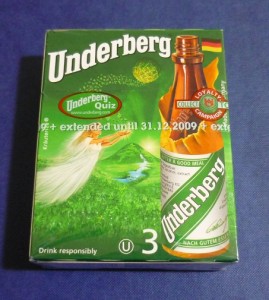 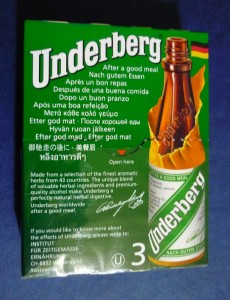 Each little bottle contains 20 ml of this mental juice, wrapped up in brown paper. According to the website, the reasoning behind this tramp-esque styling is for hygiene and protection from light. 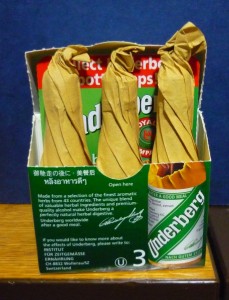 They appear to be running a promotion at the moment where you can exchange the lids (they are screw-top bottles) for Underberg merchandise. More on that in a bit.

Rather than drink it from the bottle like I assume you are meant to, I poured it into a glass for my viewing public’s entertainment. It’s not viscous as such, more sticky, like slightly thinner Calpol. 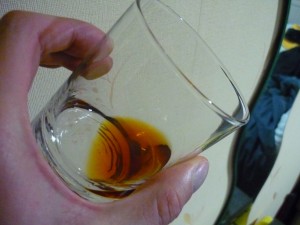 It smells like a cross between Jagermeister and Galliano. Herby and violently alcoholic. It tastes much the same too. I must admit I admired some of the gear you can get but having tried the stuff, the prospect of imbibing 96 bottles (that’s nearly TWO LITRES!) of this just to get a special Underberg glass fills me with fear. Perhaps my mind will change after I have drunk the remaining two bottles in the pack. I seriously doubt it though.

This entry was posted in Spirits and tagged underberg. Bookmark the permalink.