I’ve been interested in Bitcoin for a while as the idea behind it intrigues me. The possibility that it may become a major global currency means I’d like to own a bit on the off-chance it makes me rich. I’ve been using Mycelium Wallet on my Android phone for a while just for small amounts as a test. I fancied something that felt more secure for storage for investment purposes. I ended up with a Ledger Wallet.

Paper wallets are often recommended for cold storage but I worry that they will degrade over time or they’ll inadvertently get destroyed somehow.

Which led me onto hardware wallets. After much research it appears my impression that they all seemed to rely on a third party to use was incorrect. The third party provides a means of using it, but you are not reliant on them to get your coins back. More research seemed to narrow it down to two options: Trezor or Ledger. The Trezor hardware wallet looked good, but at 99 USD (about £70 at time of writing) it seemed quite a lot for my first foray into this arena. Ledger had a few options with the cheapest being their Ledger HW.1 at about £20. This seemed cheap enough to take a punt on, so I ordered.

My parcel arrived a few days after order and the box was shrink-wrapped and sealed. Opening it up you get the plastic card which you push the wallet out from. There’s a stylish envelope containing the authentication card and a security thing you write your wallet seed on. You push the wallet out from the card like you would with a mobile phone SIM card, then fold over a flap to thicken the USB plug section. Easy! 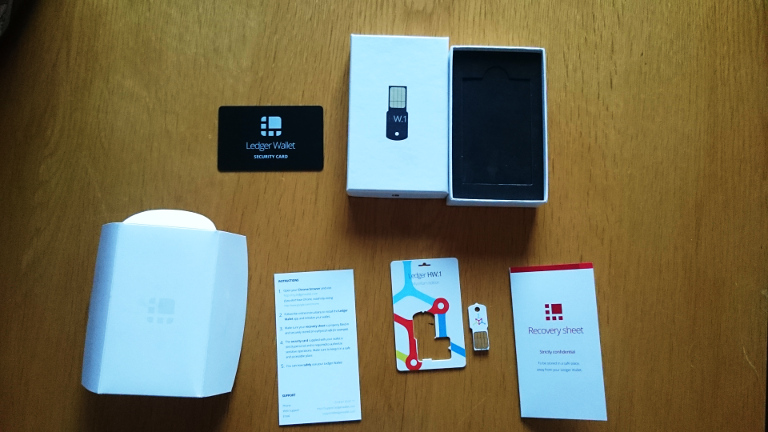 Next, you need to initialise the Ledger wallet. This must be done on a computer you know to be secure and free from viruses or malware. This is because the wallet seed is displayed on screen for you to copy down. Two main ways of doing this; the first, that I ended up using, is probably what most people will do. You simply install the Chrome app that leads you through everything and does most of it for you. The other way, which is the ideal way to my mind, is to boot the .iso file (downloadable from the Ledger website) from a CD or USB stick on computer that isn’t networked. I couldn’t get this to work at that point (I have since). Running Linux I took a calculated risk that I was unlikely to have anything untoward on my machine that could steal the key. 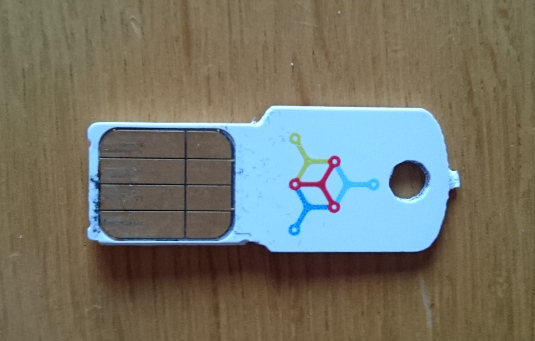 The Ledger Wallet itself

The Ledger Wallet in use

From the Chrome app, you enter a 4-digit passcode to access the device. Creating multiple wallets on the Ledger is easy. Sending and receiving was blindingly obvious too! To send from the Chrome app, you either use the accompanying Security Card as the second-factor to authenticate, or you authorise it with the Ledger Wallet Android app. This (to me) is a stroke of genius. On first run you use the Security Card to link the Android app with your device, and from then on when you send Bitcoin from Chrome, you get the option to OK it on the Android app. It always requires a separate device (phone or card) to allow Bitcoin to be moved, thus adding to the security. I’m not some security whizz, but this certainly sets my mind at ease for storing larger amounts.

The integration with Mycelium is also good, but you’ll need to be able to plug your Ledger Wallet into your mobile device using USB-OTG. Most modern mobile devices support this now. Once the account is imported into your Mycelium wallet, you can then send using your mobile device. This will need the plastic Security Card as your second-factor to authenticate the transaction.

I personally prefer sending from Chrome and authenticating with Android, as I’m more likely to be carrying my phone than the plastic card. If you’re just using it for longer-term storage though, you may not mind either way.

Regarding recovery of your Bitcoin in the event of the Ledger Chrome app no longer being available, during set-up you are told to record your wallet seed (a series of 24 words). This enables you to restore your wallet to any other software or hardware wallet that supports the standard BIP39 wordlist.

Overall, I’m pretty pleased with mine, and it does what I wanted it to i.e. store investment amounts of Bitcoin more securely than other options I currently use. They are available from the Ledger website if you’re happy to order direct, or Amazon UK. Links to Amazon do use my affiliate code and earn me a small commission, but they don’t affect the price for you. If you found this review useful, please consider buying using one of my links. Thanks!