I had an email advertising these in the UK at about £70. They looked interesting enough that I went searching for reviews and fortuitously enough, someone had commented on the review saying that a Chinese copy could be had on ebay for about US$20. Not quite believing this I searched ‘MD80’. There it was though! I got mine from zhan_gzu12 [no longer a registered user] and it turned up in just over a week. That said they have turned up in the UK at a great price:

THESE ARE NOW AVAILABLE FOR £11.76 DELIVERED IN THE UK AT AMAZON UK 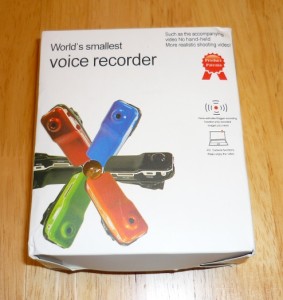 I hadn’t expected it to arrive this quickly so hadn’t armed myself with a microSD card yet. Luckily for me, Tesco had a 4 gig Sandisk one at a price I was willing to pay. It won’t operate without one as it has no onboard memory. If you need a microSD memory card for your MD80 camcorder, buy one from MyMemory – I’ve used them in the past and found the prices good and the delivery swift.

Despite the box claiming it is a voice recorder, it definitely records video. I couldn’t comment on whether it was the “World’s smallest” though. It is pretty damn small though: 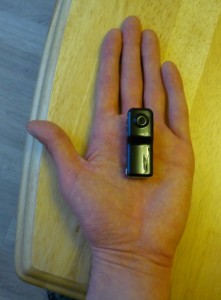 Yes, that really is the entire football endzone camera on my slightly strangely proportioned hand. It weighs about 20 g with the memory card inserted if my kitchen scales are to be trusted, and comes with a whole bunch of useful stuff. 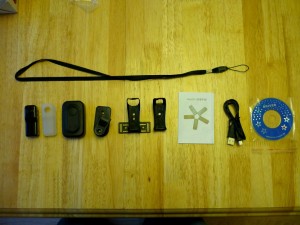 Left to right: camera, silicone cover, wall charger (two-pin chinese says 110-200V so not tempted to try it here yet), swivel stand, another more permanent stand, tie-clip attachment, manual (in English and I assume Chinese), USB cable, instructions, and across the top is a lanyard.

Having now put the microSD card into the camera, I seem unable to get it out, but when you plug the USB cable in it just shows up like a memory stick so I’m not hugely bothered. The instructions seem to be for a previous version but it’s pretty easy to work out once you have a play. On/off switch on one side. Mode switch on the other switches between normal and sound-activated. It claims to turn it on at 60 dB. It didn’t come on when I cleared my throat, but did when I clapped. Play/stop button on top. That’s it.

So how does it perform? Well, considering it only cost 12 quid, I’m pretty impressed. That’s a price where I won’t be particularly bothered if I lose it or it gets damaged. It works as advertised giving 720×480 at about 30 fps, but the speed may well be memory card dependant. First charge (internal lithium battery) took about 2 hours and it should give about the same time in use. Here’s a quick video of it in action.