I’d been thinking about putting a bit more effort into my shaving as it always seemed such a nuisance. My reasoning was if I enjoyed it more I’d be more inclined to do it more often. At this point I was shaving about twice a week using the Gillette Sensor disposables, mainly for my own comfort or my girlfriend’s.

I had experimented in the distant past with what I now know to be a Fromm ‘Hair Shaper’ Razor, the Wilkinson Sword Classic that took double-edged blades, and the Wilkinson Sword brush and soap dish. I really enjoyed the experience of shaving with the open blade, but had difficulty getting the blades and it took longer than I would have liked. The Wilkinson Sword gear fell by the wayside too as the razor just felt too light and didn’t seem to give the best shave. The soap dish and brush didn’t seem to work as expected either…

I toyed with the idea of buying a proper open razor but they are pretty expensive and need a bit of care, so I decided to look into ‘safety razors’ ie. those that take a double-edged (‘DE’) razor blade. Further research indicated that a good brush was also an integral part of the experience. I decided to plump for the Merkur 34C and an Edwin Jagger Medium Best Badger brush. The 34C is the razor most often recommended to those new to DE shaving so that was an easy choice. There are several grades of badger hair used in brushes, and while ‘best’ is not the most expensive, it seemed most appropriate to what I wanted from a brush. I also picked up some shaving creams and blades. 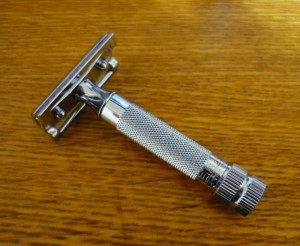 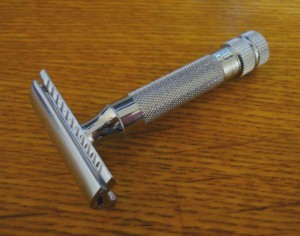 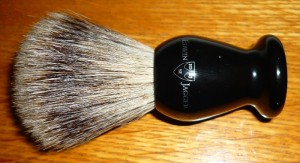 Before investigating wet shaving properly, I’d always felt the Wilkinson Sword brush was too soft to lather properly. I turns out I was using too much water on the brush and my opinion is now that it is too hard!

I won’t go into the detail of the wet shaving process here as it is done far better elsewhere, but I will say the difference in the experience is remarkable. It actually feels and looks like I have shaved when I have, and my skin feels much better. Not to mention the difference in price between a DE blade and a disposable razor…

I would be very surprised if I ever went back to a cartridge razor now.