I’ve recently been playing video directly from my laptop via HDMI on to our TV. Whilst this works amazingly well, I have found it somewhat irritating to keep getting up to start the video and so on. I’d seen mini wireless keyboards before but with no great urgency in getting one I’d not really looked at what was available. Now I felt I needed one.

After reading many reviews, the Rii Mini i8+ seemed to fit my criteria. In particular, I was looking for something with a UK keyboard and a central touchpad. Backlighting was also a plus point as was cheapness! Rii do several models with a central touchpad but some of them have a split keyboard which I wasn’t sure how well I’d get on with. The i8 and i8+ looked more like a game controller but the keyboard wasn’t split and the touchpad was central. The i8+ also had the added bonus of being easily found with a UK layout AND backlighting! I do think it is ugly, but at only £14 it was cheap enough that as long as it did the job I didn’t care. Here is mine: 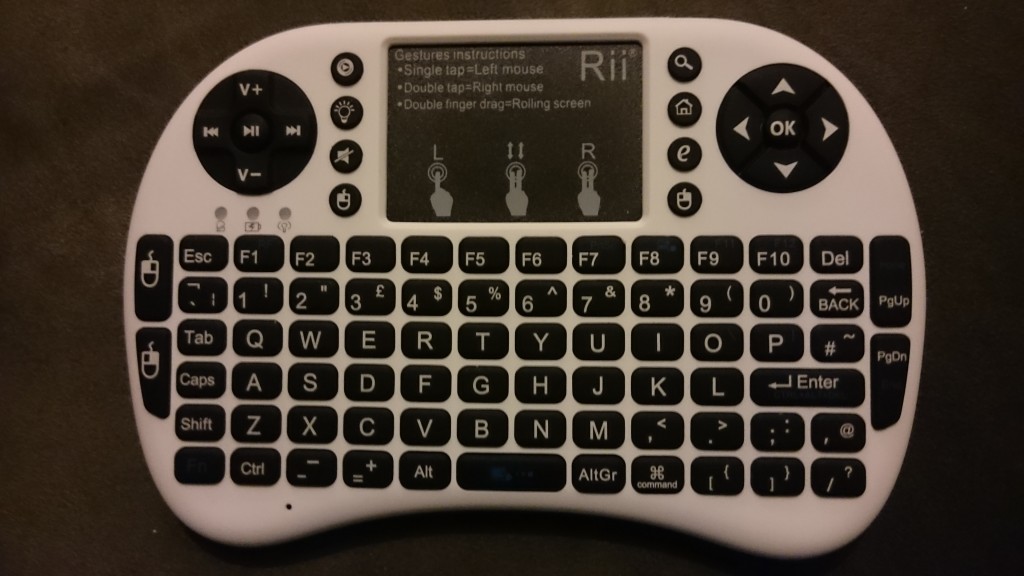 There is a small compartment on the back that holds the USB receiver that plugs into your computer. As this is not Bluetooth, it actually works exactly the same as you would expect a wired keyboard or mouse to do so. This means that a large swathe of devices that accept USB peripherals are compatible with this device e.g. TVs, phones, etc.

Consequently, it works exactly as you would hope. I run Ubuntu so I was concerned there may be some compatibility issues but everything works as it should. The only gripe is the Play/Pause button seems a bit ‘sticky’ in VLC, toggling between the two very quickly so it often takes a couple of tries to get it to pause or play again.

The bonuses are numerous however. First up is the fact it is a UK layout. This seems quite difficult to find in these mini keyboards and having the ” and the @ in the right place for us makes it much more usable. The touchpad works well, if a little small, but then I did want the overall package to be quite small so it is somewhat inherent in my requirements. There are mouse buttons on the left side of the keyboard, either side of the touchpad AND multitouch works on this so you can use single tap on the pad for left, or double tap for right.

Backlighting (see image below) hasn’t been as much use as I expected; not because the output is insufficient, just that we don’t tend to watch stuff in the dark. One of the major features I chose the i8+ for over the original i8 is the auto-power off after three minutes. I rarely bother turning the keyboard off now using the slide power switch, as it simply sits there waiting to be woken up with any button press, upon which it powers on and reconnects. Note the touchpad will not bring it out of standby, but this is not a problem as the first button press appears to only wake it up rather than actually registering as a keypress. 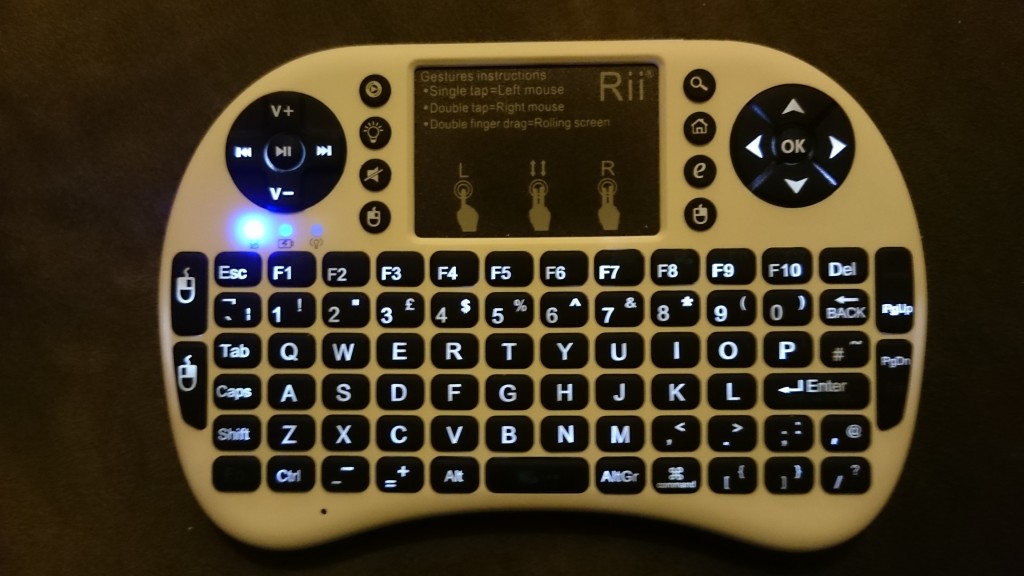 It does feel surprisingly lightweight but sturdy enough. It’s already survived multiple drops from the arm of the sofa, and it’s not something I would want to stand on with my full weight however. The keyboard is perfectly fine to use, no worse than a mobile phone and people seem to get on well enough with them! I’ve even started using it occasionally with my laptop on my lap if the cat wants to lie on my stomach, which suggests it’s good enough for normal use. Battery life I am unable to comment on, other than the fact that it seems to last ages. I charged it when it arrived, and I gave it a little top up yesterday as I believe it’s better for the battery not to cycle it fully every time, and I think that’s around two or three weeks of light use.

Range seems fine for my use across the living room – I’ve not had any concerns about this at all. Some Raspberry Pi users have experienced issues, though this is believed to be due to EM screening on the Pi. They have got round this by using a short USB extension cable which alleviates the problem entirely.

My overall opinion is that this is a spectacular device, and at this price it won’t break the bank even as a whim purchase. Get it from Amazon UK now!